David Torn is known for combining electronic and acoustic instruments and for his use of looping. 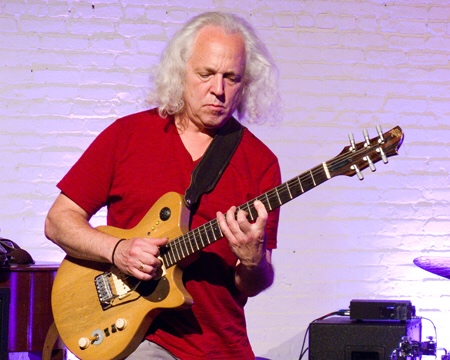 In addition to his composition work, Torn's music has been featured in a wide variety of films, including Friday Night Lights, Velvet Goldmine, Adaptation, The Big Lebowski, The Departed, Fur, The Hoax, Kalifornia, Traffic, Reversal of Fortune, Tibet, and Three Kings. He studied with Leonard Bernstein (within the "Music for Young Composers" series), as well as with guitarists John Abercrombie, Pat Martino, Paul Weiss and Arthur Basile. Torn works out of his personal studios, known as Cell Labs; occasionally, he uses the pseudonym "splattercell."

David Torn first performed on Bowie’s 2003 album, Reality, where he was teamed up with Earl Slick. He was also featured on Bowie’s 2013 release, The Next Day, where he added some ambient guitar work that at times recalled the lush wash of sound created by Robert Fripp on 1977’s “Heroes.”

“Dancing Out in Space” is representative of this. “He comes with huge amounts of equipment that he creates these aural landscapes,” producer Tony Visconti said of Torn in an interview with Rolling Stone about The Next Day. “He uses them in a rock context with all that ambient sound, and he's bending his tremolo arm and all that. It’s just crazy, completely crazy sound on that track.”

During the pandemic David Torn  accepted to play guitar for Slinky Vagabond using his Home Recording Studio to record the track.