Midge Ure, known as frontman of Ultravox,  is a Scottish musician, singer-song writer and producer.

His name, Midge, is a phonetic reversal of Jim, the diminutive of  his actual name. 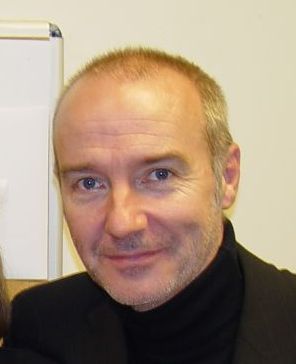 Midge Ure  began his professional music career with Salvation, a Glasgow-based group that became the bubblegum band Slik in 1974.

Upset by the change of direction, he left the band to join the Rich Kids, a punk-pop group led by former Sex Pistol bassist Glen Matlock.

The Rich Kids only released one album, 1978's Ghosts of Princes in Towers, before breaking up later that year.

In 1978 Midge Ure  formed  Visage with drummer Rusty Egan and vocalist Steve Strange. With Visage he signed the hit single “ Fade to Grey”.

In July 1979 Midge Ure stepped in to help Thin Lizzy complete a US tour following guitarist Gary Moore's abrupt departure. He also contributed guitar parts to "Things Ain't Working Out" and "Dublin" for the 1979 Thin Lizzy remix compilation The Continuing Saga of the Ageing Orphans.

Thin Lizzy then toured America and Japan. In 1980, during the second part of this tour, he switched to keyboards, and was replaced by Dave Flett and then Snowy White as guitarist.

At the end of the tour Ure left Thin Lizzy and returned to his primary interest at that time, Ultravox. He continued to collaborate with Lynott, co-writing Lynott's biggest solo hit, "Yellow Pearl".

Once he had joined Ultravox, in 1980, Ure helped make the band a mainstream success; during this time he also worked as a producer, making records with Steve Harley and Modern Man.

In 1982 Midge Ure  released a solo single, a cover of the Walker Brothers' hit "No Regrets"; it climbed into the U.K. Top Ten.

The two wrote the song "Do They Know It's Christmas?" and assembled an all-star band of British musicians to record the single; it sold millions of copies over the 1984 holiday season and prompted Geldorf  to organize the benefit concert Live Aid in 1985.

In 1985, Ultravox was put on hiatus and Ure began to pursue a full-time solo career.

The single “If I Was” from his debut album The Gift, was a UK number one single.

Midge Ure worked for over a decade on the next solo album Fragile, which was released in  2014. The making of Fragile coincided with Ultravox’s 2012 reunion record Brillant.

In 2017, he collaborated with composer Ty Unwin on the album Orchestrated, which featured orchestral reworkings of Ultravox’s  songs, as well as songs from his solo career.

In August 2020, Midge Ure was creating his “Backstage Lockdown Club” with live-streamed  acoustic songs and Q&A sessions, to members on the Patreon Website.

During the pandemic Midge Ure  accepted to play  guitar for  Slinky Vagabond using his Home Recording Studio to record the tracks.