Slinky Vagabond are in Forbes Magazine! 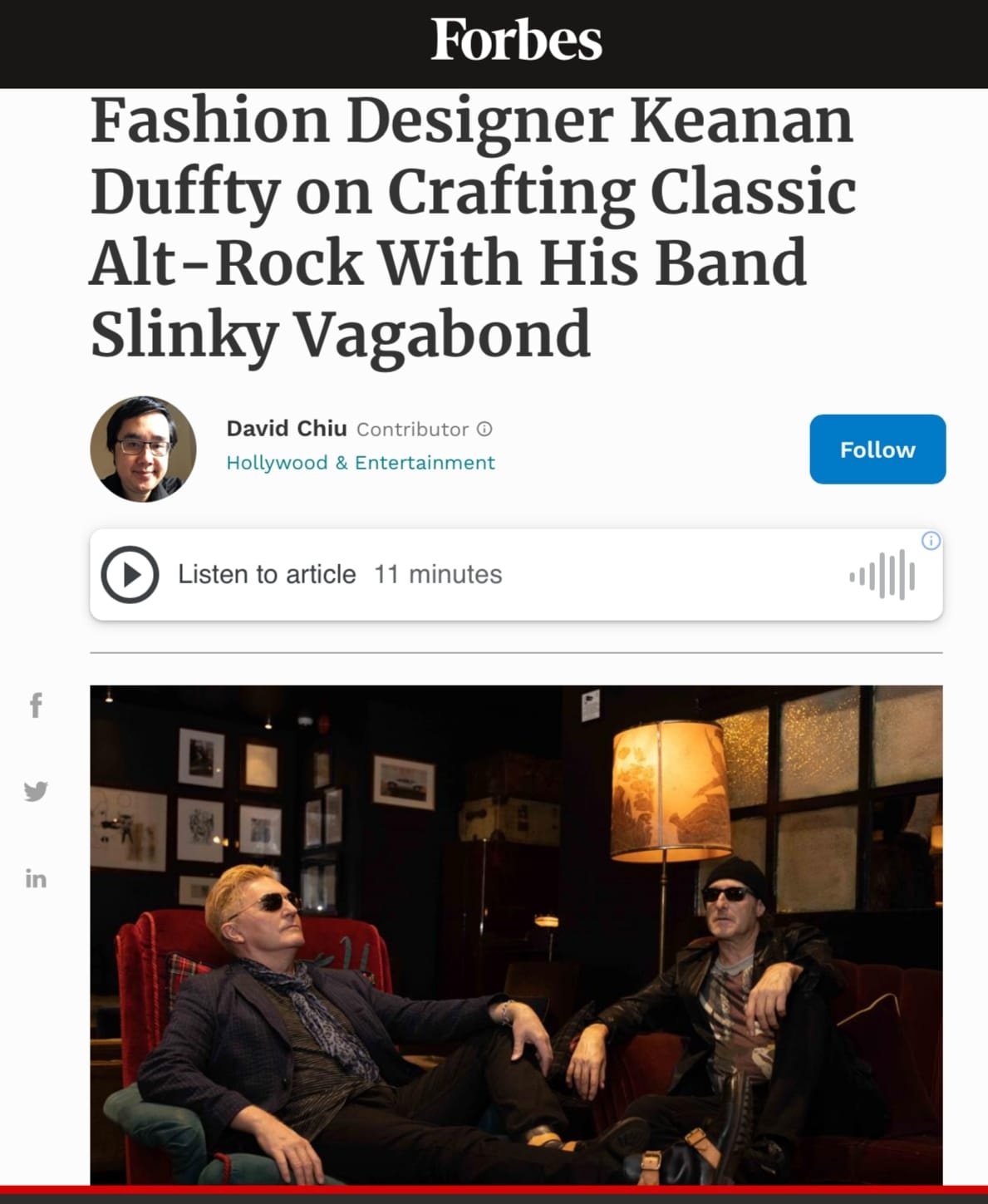 For about 40 years, Keanan Duffty has built a long and award-winning career in fashion design. The New Yorker by way of Doncaster, England, started his own fashion label under his name in 1998, dressed the Sex Pistols for their 2003 U.S. tour, and collaborated with David Bowie in 2007 on a clothing line inspired by the legendary rocker for Target. Additionally, Duffty is the founding Program Director of the Masters in Professional Studies-Fashion Management at the Parsons School of Design. But amid his impressive resume in fashion, Duffty never forgot the other creative passion in his life since the late 1970s: making music. 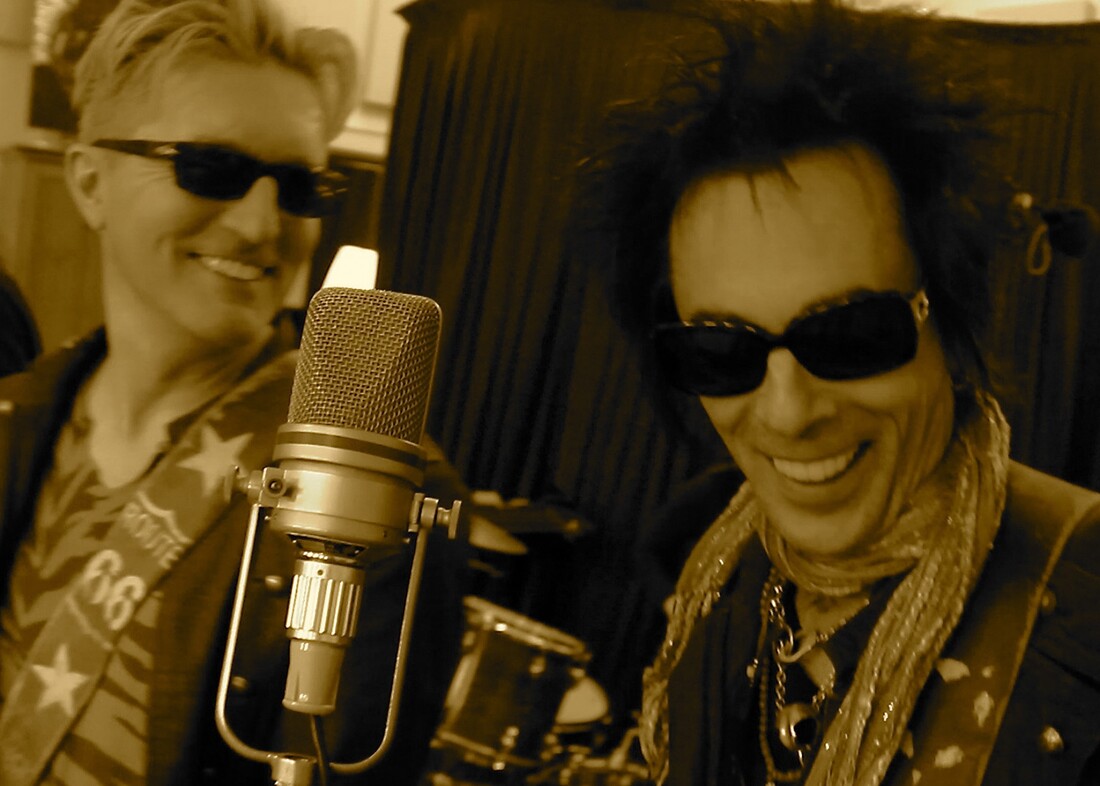 EonMusic, the UK online music magazine, interviewed Keanan Duffty about his experience with David Bowie, Sex Pistols, and the first incarnation of Slinky Vagabond with Earl Slik, Glen Matlock and Clem Burke. And about the new album for Slinky Vagabond with Fabio Fabbri and many importan artists.

"Slinky Vagabond main man Keanan Duffty has rubbed shoulders with some of the most iconic artists in music history. Working with David Bowie and the Sex Pistols as a fashion designer, the journeyman musician has stepped out from behind the scenes to front collaborative outfit Slinky Vagabonds. Originally formed in 2007, the band now comprises primarily of Duffty and instrumentalist Fabio Fabbri. Roping in a cast of guests including Midge Ure, and members of Guns n' Roses and Wishbone Ash, their latest set 'King Boy Vandals' is released in December. We caught up with the pair for a chat about the album. " 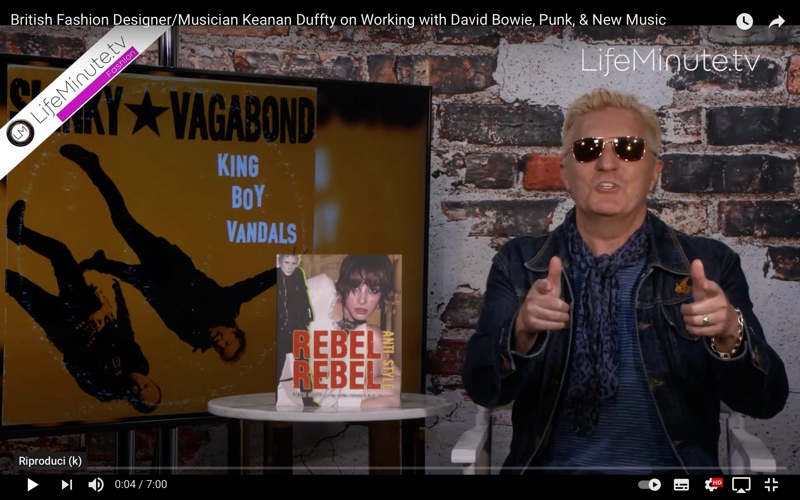 "Award-winning British fashion designer and musician Keanan Duffty has made mixing music and fashion his forte, working closely with artists David Bowie and the Sex Pistols, and playing alongside Clem Burke, Patti Smith, Scissor Sisters, Earl Slick, and Moby. The London Central Saint Martins first-class honors graduate dressed the Sex Pistols for their 2003 American tour, and in 2006 he collaborated with David Bowie to create a fashion collection for Target. As a member of the Council of Fashion Designers of America and CFDA Education Committee, Duffty served as stylist for the 2016 CFDA Awards tribute to Bowie, featuring Tilda Swinton and Michael C. Hall, and with costumes by Kansai Yamamoto and Donatella Versace. He's even written a book called Rebel Rebel Anti-Style, which explores fashion, music, and "anti-fashion" icons. Duffty has had his own success as a singer with his music project Slinky Vagabond. In 2007 he formed the first incarnation of the musical group, which consisted of Glen Matlock (Sex Pistols), Clem Burke (Blondie), and Earl Slick (David Bowie/John Lennon). Slinky Vagabond made their debut in May of that year as part of Joey Ramone's annual Birthday Bash at Irving Plaza NYC. Duffty performed at the Marc Bolan 30th Anniversary show at the Delacorte Theater, Central Park, New York City, in September of the same year alongside Patti Smith, Scissor Sisters, Moby, Lloyd Cole, and the New York Dolls. On April 18, 2008, Duffty performed with Clem Burke at the opening of the John Varvatos boutique in the former CBGB's at 315 Bowery. The lineup featured performances by Slash, Tom Morrello, Joan Jett, Alan Vega, Ronnie Spector, Ian Hunter, and Cheetah Chrome. The members of Slinky Vagabond have since parted ways, but the band still lives on with Italian guitarist/producer/songwriter Fabio Fabbri joining Duffty. They recently released a new album, King Boy Vandals, which features influential musicians Midge Ure (Ultravox, Live Aid), Dave Formula (Magazine, Visage), David Torn (Bowie, Sylvian), Tony Bowers (The Durutti Column), Richard Fortus (Psychedelic Furs) and Andy Hilfiger (Tommy's brother) playing bass in one song. The all-around artist and creative came to visit us at the LifeMinute Studios to talk about the 10-track record, working with Bowie, and the evolution of punk fashion."

All About Rock talks about the new Slinky Vagabond album 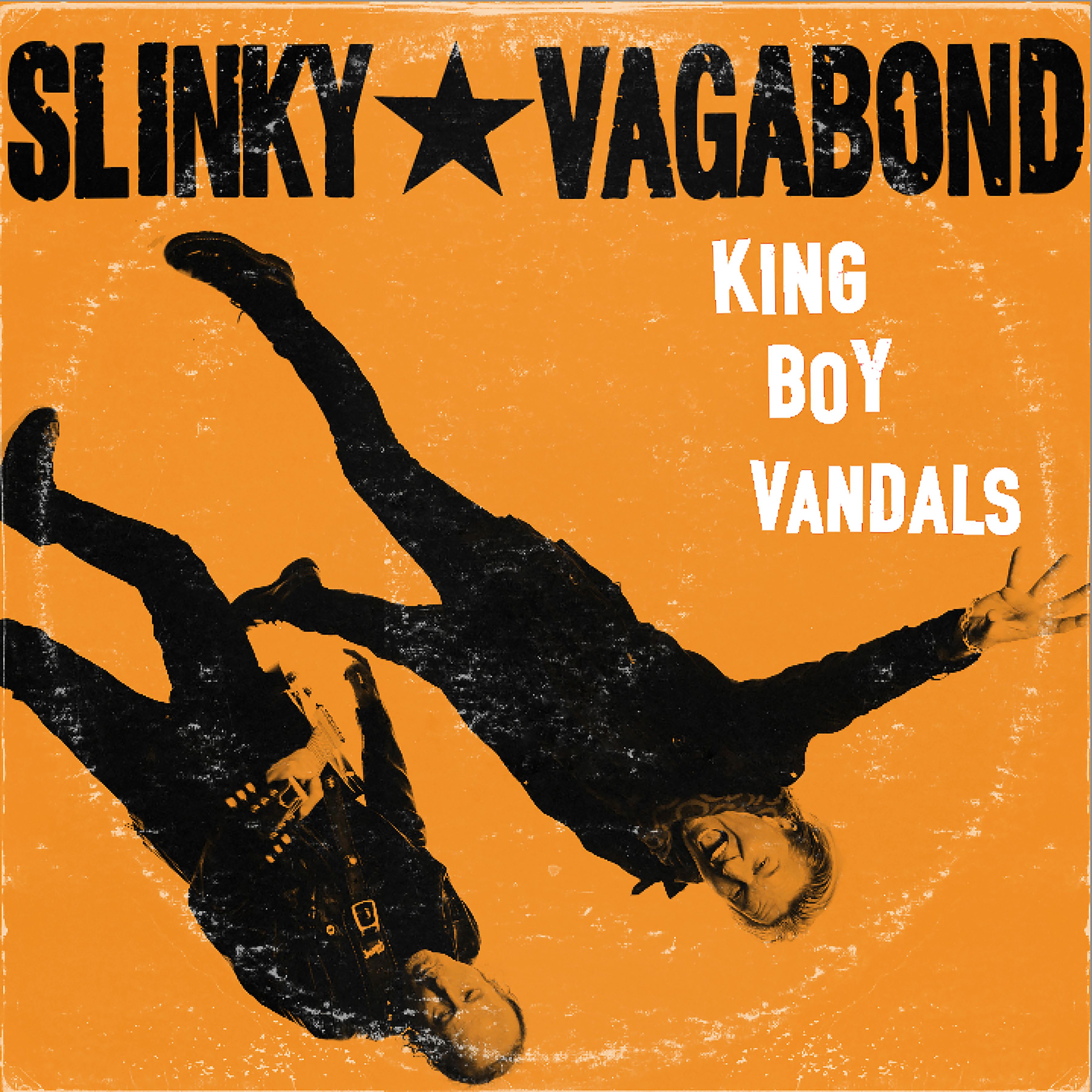 The band’s ethos was built with guest collaborations at its core and this has remained the same since 2007. The band’s original lineup featured Keanan Duffty – the current driving force behind the band – Earl Slick (David Bowie, John Lennon), Glen Matlock (Sex Pistols, Rich Kids), Clem Burke (Blondie, The Ramones) and Pete Shelley (Buzzcocks) on backing vocals. They were structured like hip hop bands that construct songs on features, tracks and featured a veritable slew of collaborations.

"Can you believe we’ve been in operation for FOUR years now, and the article you’re about to read below is is the first interview we’ve ever conducted with any recording artist? Strange but true. However, trust me, as we move forward, that’s all about to change.

Sure, we’ll still be attending gigs [and going out of our way to advertise shows by selected key performers] – and that will probably never alter, unless we close for an extended travel break [which was actually the original plan from March 2021 onwards, at least until the entire world went on hiatus] It’s just that post-pandemic lunacy, your humble Editorius has sattethed downeth and had a good old ponder over precisely what he sees as the future of rock journalism- and has hereby reached the conclusion that what most intelligent people REALLY want, especially in this ever-shortening life, is an informative insight into the motivation behind a musician’s work [predominantly taken straight from the mouth of thae musician in question] As a result, we at MM intend to slowly phase out the endless rehashings of descriptive cliche that pass for most ‘reviews’ [although we will still review gigs as and when we are asked to, and in doing so attempt to make them ‘better’ by far than your average hack job] and start introducing more features like the one below. So, sprawl back on your leopardskin rug, paint your nails and pour yourself a refreshing JD, as we delve into the trash-glam boho universe of world-renowned fashion designer Keanan Duffty and his collaborative rawk n rawl supergroup SLINKY VAGABOND!! " 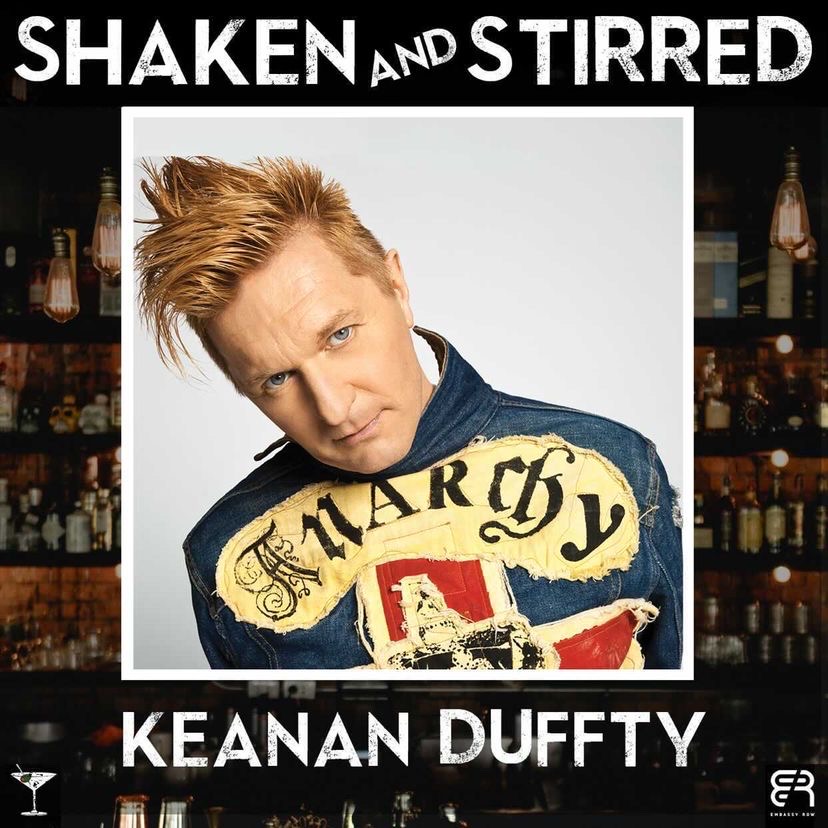 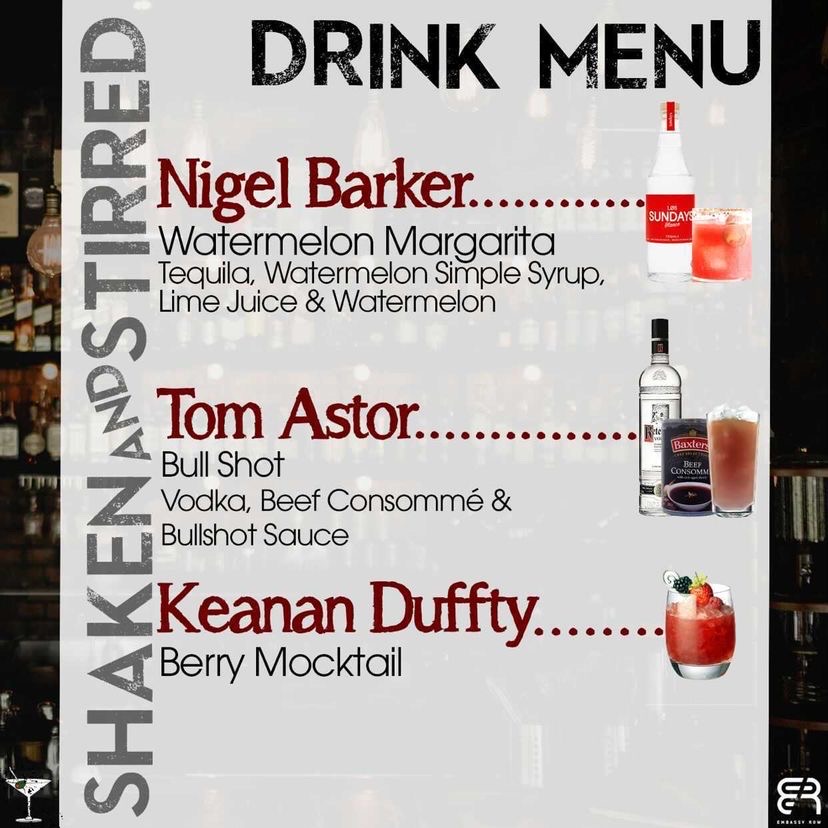 From the chap who brought us the Gentleman's Code on SiriusXM, famed fashion photographer Nigel Barker teams up with his Boarding school pal and renaissance man Tom Astor AKA The Snapper, to bring you a podcast that promises to leave you both shaken and stirred. The show is a culmination of 100s of dinner parties, boozy lunch and drawn out breakfasts where no subject was taboo and even the obvious can be surprising! So pull up a seat and join the conversation.

This week Nugel Barker and Tom Astor  invited Keanan Duffty onto their brillant podcast "Shaken & Stirred" for a bit of a chin wag and a bevvy...in case of Keanan a berry mocktail!

They discuss his fashion & music career, working with David Bowie and his latest album with his band, Slinky Vagabond.

In this video Keanan explains what "King Boy Vandals " means!

You can listen to tho whole interview HERE